Knitting has existed for many centuries. And although it used to be a craft in the past, nowadays, it sees revival as an art. It is an exciting creative process which allows making unique articles.

If you have decided to get to know knitting better, articles provided on the website can help you get an idea of what knitting is and what skills, tools, and materials you will need to create a knitted product.

Knitting is a process of producing the fabric of yarn using specialized tools (needles, a crochet hook or a knitting machine). It is the tool that defines the knitting technique:  needle knitting, crochet or machine knitting.

Depending on the tool used, a knitted fabric can vary in its structure (pattern), density and plasticity. It is accounted for by different ways of fabric formation. 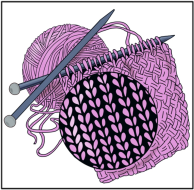 Needles are a pairing tool whose working part is a long pinpointed at one end. The pointed tip is used to grab yarn while knitted stitches are located on the pin. The other end of a knitting needle is fitted with a knob (straight needles) or connected with the other needle by a strand (circular needles).

Fabric whose upper part is a row of stitches is located on one needle. The second needle is used to grab each loop, take it off and pull yarn through it. This is how needles alternate and fabric is built up.

Using needles, one can create the broadest range of different patterns: openwork/lace, braids, arans, ribs, etc. (You can read more about stitch patterns in our following articles on the website) 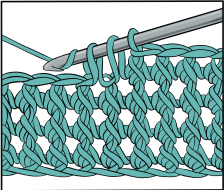 A Crochet hook is a single tool, a pin either with or without a handle with a hook at one end which is used to grab yarn and pull it through the fabric. This is how the material is built up. One or sometimes a few stitches can be on the crochet hook at a time. This technique allows for creating very openwork fabrics using a crochet hook. At the same time, there are methods which can be used to crochet very tightly woven and even frame pieces.

In general, crochet allows making denser fabrics as compared to knitting except for very openwork fabrics which can hardly be compared with those knitted with needles as the techniques used differ significantly. 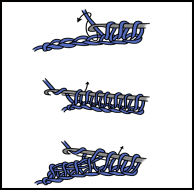 There is an interesting technique which combines knitting and crochet. It is Tunisian crochet.

Crocheting of a single row of stitches consists of two stages: first, all stitches of fabric are cast on (like when knitting but casting on is performed using the hook), then the yarn is pulled back through the cast on stitches.

When a double-ended hook is used, crochet is always performed in the same direction (both casting of stitches on and pulling of yarn) but from two balls of yarn. This allows for combining different thread and obtaining peculiar looking fabrics.

In general, Tunisian crochet provides denser fabrics than standard crochet. You can use the technique to make even coats and jackets which are very warm and keep their shape well.

A specific feature of the technique is that the fabric is almost not susceptible to widthwise deformation and is only slightly deformed lengthwise unlike that made using standard crochet, let alone needles.

Machine knitting is performed by a particular machine fitted with needles on which knitted fabric is formed using a special carriage and supplied yarn.

Machines vary in the thickness of the yarn used.

Main advantages of using this kind of machines: high knitting speed and high quality of the fabric.

Main disadvantages: expensiveness of machines; not all types of yarn are suitable for knitting, the process of training in knitting takes a little more time.

So, how can you choose the knitting technique which suits you best if you are only coming to know knitting? There is only one tip: you have to try. Much depends on the individual in knitting.  Some people like needle knitting just, others prefer to crochet, and there are also those who enjoy using both tools choosing the most appropriate one for a particular task. It is hard to say which technique will appeal to you. It is recommended to perform the most straightforward operations using a crochet hook because this skill will later be beneficial (for example, for connecting pieces or finishing the neckline).

One way or another,  a wide choice of high-quality tools and yarn will make knitting process very enjoyable and fascinating while a large amount of educational information: training courses, magazines, and the Internet will let you master any knitting technique very quickly.

Have a nice trip to the world of knitting!

How to know how much yarn is required