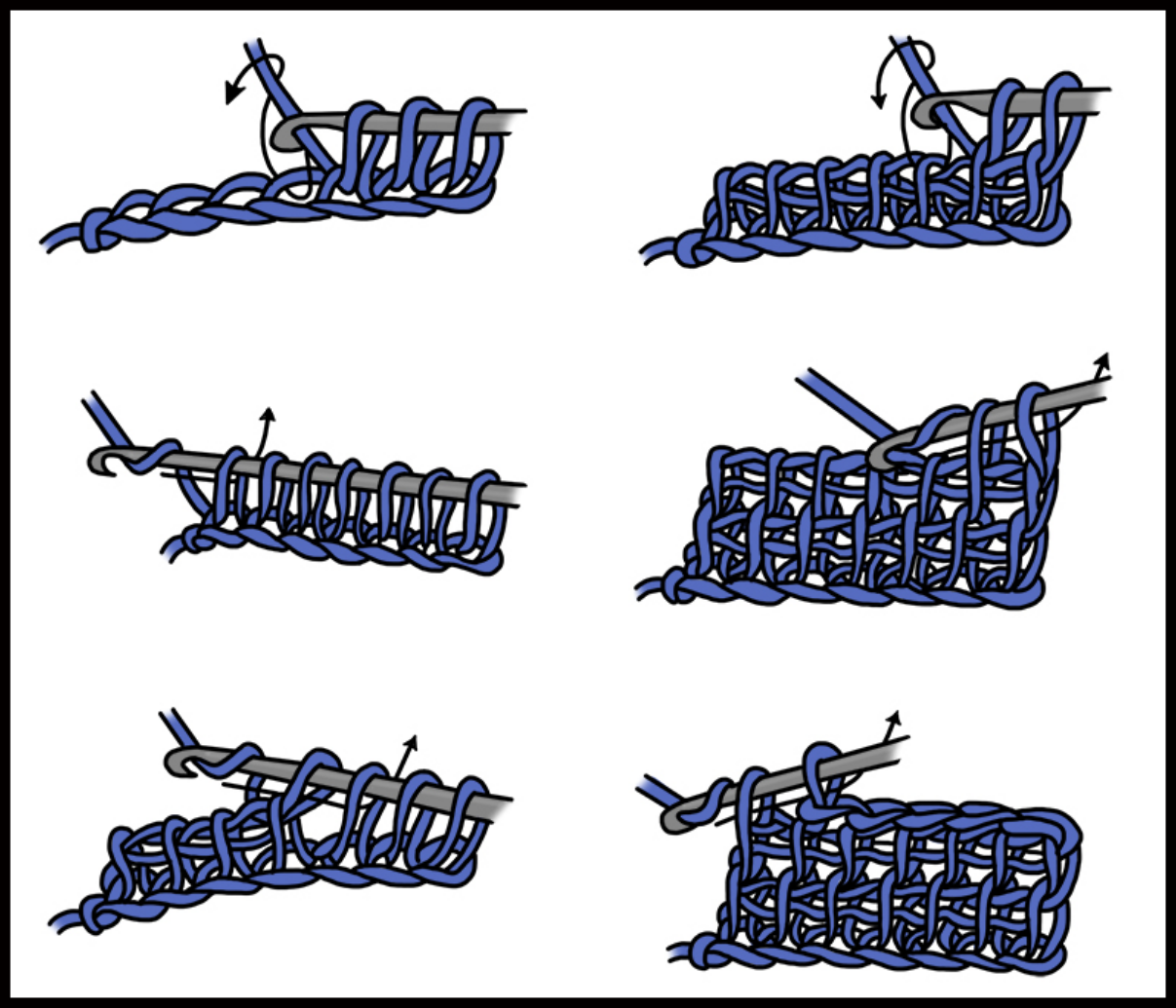 In this article, we will discuss the Tunisian/Afghan crochet technique in more detail and give you an idea of what to start with.

It is an exciting crochet technique which has existed for many centuries and is becoming more and more popular nowadays.

Main specific features of the technique:

There are two types of Tunisian crochet hooks:

Below, we will describe the crochet technique for single ended and double ended crochet hooks because they differ greatly while having much in common as well.

Crochet with a Single-Ended Tunisian Hook

Then, each row is crocheted in two stages:

Important: crochet is always performed on the same (front) side of the fabric.

When patterns are described, and the number of rows is specified, each row is always supposed to be made in two stages.

Stitches in a new row can be formed employing grabbing crochet walls in different ways. Due to this, the fabric formed looks different. Below are the main types of crochets:

In fact, there are many more types of crochet stitches, but we recommend you to get to know the above ones first of all.

Crochet with a single-ended Tunisian crochet hook as well as crochet with a standard hook allows changing the direction of crochet easily. This, in turn, allows making seamless articles or those with a minimum number of seams.

There are numerous patterns for multicolor or openwork crochet. Using a Tunisian crochet hook, it is straightforward to crochet various openwork nets which can then be used to make nice summer clothes.

Crochet with a Double-Ended Tunisian Hook

It is mainly used for circular crochet.

Circular crochet: when the first row has been completed, it is closed into a circle, and the working yarn is pulled through the first stitch of the first row so that a ring is formed. Then, the fabric is built up spirally. The article is made without seam or with few seams.

A double-ended Tunisian hook can also be used for back-and-forth crochet. But we recommend getting to know this technique when you already have some experience in Tunisian crochet.

Each row is also crocheted in two stages but one yarn ball is used for step 1, and another one is used for step 2. At the second pass, the work is turned to its backside and stitches are shifted to the opposite side (towards the second head of the hook). Then, yarn from the second ball is picked up, and the reverse row is made just like when using a single-ended hook, but now the crochet is done on the back side. When the last stitch is reached, it is not crocheted, and the work is turned to its front side again, the first yarn ball is taken, and stitches continue to be cast on for the “straight” row. This way, step 1 and step 2 alternate and fabric is built up in a circle. You can cast on and close any number of stitches you need instead of all stitches at a time. This allows crocheting in a ring easily.

Another exciting thing is that you can take yarn of one composition or color for the “straight” row and another kind of yarn for the “reverse” row. This is how you can vary the density and look of the fabric.

Crochet using single ended and double ended Tunisian hook can be combined if required. For example, when knitting upper body garments: the body and sleeves can be made using circular crochet (double-ended crochet hook) and all in-between pieces such as the back neck, shortened rows, etc. can be crocheted using a single-ended hook.

To understand crochet technique better, we recommend you to crochet small swatches of different yarn using different stitch techniques to see how different fabrics look and feel all nuances with your own hands.

We recommend to start crochet with small articles consisting of a few pieces and then gradually proceed with more significant garments.

Have a nice trip to the world of knitting!